A few weeks ago now, I attended a reading of poetry in Sitges in which several friends of mine participated, as part of the launch of the poetry magazine Poetari.  In particular, my friend Pip translated into Catalan and read a poem by a friend of hers, originally written in English.  This inspired me to try my hand at some translation myself and see how some of my favorite poems in English held up in Catalan.  It's difficult!  It is very interesting, though, engaging in the sort of interpretive exercise of translation, trying to preserve double meanings or rhythm found in the original, and balancing that with making use of the sonic qualities of the language of translation. 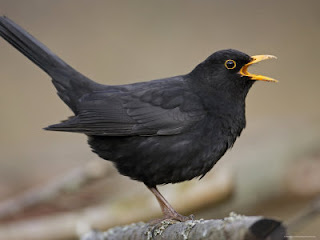 Here I've posted my translation of Wallace Stevens' "Thirteen Ways of Looking at a Blackbird" (original poem here).  I think the poem lends itself well to translation in its structure, and I'm fairly pleased with the result...


Read more »
Posted by Stephen Shull at 2:16 PM No comments:


A selection of my photos from Holy Week services in Barcelona in 2013...

Read more »
Posted by Stephen Shull at 11:14 PM No comments:

Today is Palm Sunday, which I celebrated at the Basílica de Sants Just i Pastor here in Barcelona, one of the oldest parishes in the city, currently administered by priests of the Community of Sant'Egidio. 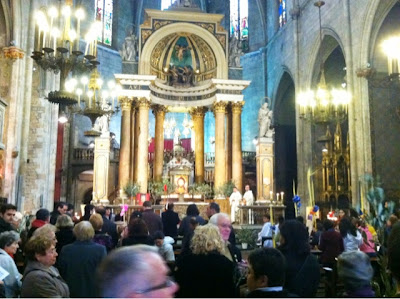 It was quite lovely to see all the palmons - elaborately shaped and arranged palm fronds - mainly carried by children.  Here are some particularly elaborate palmons from Elx, in the Valencian Community:

These definitely put our simple palm crosses back in the US to shame!  (That's how Christianity works - the bigger and more elaborate the palms on Palm Sunday, the more heaven points).

Beyond the palms, it was a pretty standard Mass in a really beautiful building.  Very nice, but also made me miss going to Mass back home.  More on Holy Week this Thursday, Friday and Saturday!

Territory of the Secret Language

When I chose for the name of my blog a quote from an Occitan poet, I was reminded of an article written by my good friend Florenci in 2010 about a trip he took through the historically Catalan- and Occitan-speaking regions of southern France, today's region of Languedoc-Roussillon.  Languedoc is named for the Occitan language ('langue d'oc'), a fact touched upon in Florenci's article, and Roussillon (Rosselló in Catalan) is the region of Catalonia that was ceded to France by Spain after the Treaty of the Pyrenees.

It is a wonderful view of the social realities of two minority languages in France (where only recently, yet again, the government has refused to ratify the European Charter for Regional and Minority Languages), but is also generalizable to many situations around the world - something that Florenci calls in the article the "vision of a parallel world", which is a phrase that has stuck in my mind.  And even more, it is written beautifully.  For my blog, I asked if I could publish a translation done by me.  The original is written in Catalan, and another translation was made into Occitan by Patricia Delbosc.  Florenci agreed, and you can find my translation after the cut, along with photographs taken by Florenci during his trip.  I hope my translation does his work justice!

Last night I watched Shakespeare Wallah, an Merchant-Ivory film from the 60s.  One of the best movies I've seen in a long time!


It is the story of a British family who have a small traveling theater troupe in India, who perform Shakespeare plays in various places around the country.  Felicity Kendal plays the daughter, Lizzie, who has lived her entire life traveling around India (though, I couldn't help but notice, her character doesn't speak anything but English).  Her love triangle with Shashi Kapoor's Sanju and Madhur Jaffrey's Manjula (a glamorous Bollywood actress) is the main focus of the story, while in the background her family contemplates returning to England as their fortunes fade in their adopted home.

Interestingly, the story is loosely based on Felicity Kendal's actual family, who were traveling theater performers in India (her parents in the movie are played by her real life parents).  One needn't know that fact to enjoy the movie, but it definitely added a layer of melancholy watching the characters discuss their uncertainty about their own futures, knowing how personal that discussion really was.

The other very interesting aspect of the movie was the dialogue between British and Indian cultures, colonial India and independent India, and traditional theater versus modern films.  The theater troupe is, of course, a remnant of India's colonial history, and 20 years after India's independence, their audience is dwindling - both because British residents in India are progressively fewer in number, and the Indian audience is progressively less interested in their work and more interested in Bollywood films (a symbol of modernity as well as India's independent cultural production).  There is a scene where Lizzie's mother is attempting to convince her to go to England to visit (a place where she's never been), and tells her how wonderful it is to be in a place where one truly belongs.  Lizzie was born in India and has known no other country, but she is simultaneously not a part of it.  At least part of that, I have to think, is that their mode of life and their vocation (never settling down, performing the plays of that utmost symbol of British culture) precludes Lizzie from ever becoming a part of the only country she knows.  She was born in India, but she and her family are British.  Their way of life makes less and less sense, both in India and in the modern world.  Eventually Lizzie must decide to what world she wishes to belong.

Today's dinner consisted of some relatively adventurous food - specifically Hake egg sacs which are in season now.  I'd had them prepared at a friend's apartment, and decided I needed to try making them for myself.  They're pretty gross to begin with!  They look like some sort of combination of lungs and testicles.  After they're poached for about five minutes they end up looking like this:

I covered them up and let them chill in the fridge.  For dinner I sliced them up and topped them with diced red pepper and onions; then salt, pepper, lemon juice and olive oil.  Now they look a lot more appetizing, and they really are very delicious. 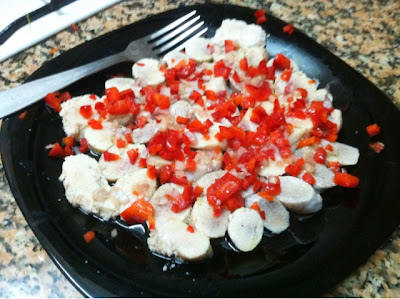 Let's see if I can blog on here!

Since Google Reader is going the way of all flesh, I decided to import all my feed subscriptions to Blogger to read them here.  It's not as nice as Google Reader, but so far seems better than other possibilities.  O tempora!  O mores!

Since I plan on being on this page more to read other blogs, I might actually use this blog platform to share thoughts and links to posts that I enjoy.

A selection of topics I will no doubt cover:

- Linguistics & Languages
- Food
- Politics
- Ecclesiastica
- Cats (I think there is some sort of universal internet cat quota I need to follow, right?)
- Things I think are funny (beyond cats)
- History
- etc.

A note on the title: The phrase Nadi contra subèrna comes from the Occitan language and means "I swim against the current".  The verse was written by the medieval poet Arnaut Daniel as part of an identification of his vocation and style:

Ieu soi Arnaut, qu'aimi lo vent e caci la lèbre amb lo buòu e nadi contra subèrna.
"I am Arnaut; I love the wind and hunt the hare with the ox, and swim against the current."
Posted by Stephen Shull at 12:42 PM 2 comments: